Here are our favorite toys non-essentials from the first four months. I'm sure to add more soon as things change.

I'd originally titled this "our favorite toys," but as I added them, I realized some are purely functiofrustratedthers are just toys... here's the best of it. You may notice there are only a couple plastic items. I really don't think plastic is good for babies' mouths, and our little baby dude puts everything in his mouth. I really like cloth and wood toys, and try to provide mostly these for him. Of course, there are some exceptions. I haven't found a picture yet, but his all-time favorite toy is a plastic maraca (percussive shaker toy). It's also the first toy that he bled on- it cut something in his mouth when he chewed on the handle. Boo... I'll add a picture shortly. It was absolutely fabulous until he started chewing on the wrong end, so we got at least 3 good months out of it. Not bad at all. Hape toys makes some great stuff. The xylophone/pounding toy pictured is really fun. We bought it used and didn't know we should have gotten a hammer. It's great as it- we can sort of punch the balls through (a little bit of silicone holds them in place but they budge easily with pressure) and the balls fall onto the xylophone. The xylophone has a handle and easily slides out of the hammering bench to be a mobile instrument. Very innovative, colorful, and probably a toy we'll "hear" a lot of. We'll find our own hammer.

We love this wooden rattle from Grimm's but sadly they only sell to end-users in Austria and Germany. If you can find someone who sells them, their toys are gorgeous. Here's the site.

Once our baby really got into tummy time, I wanted to give him a ball to encourage him to go after it, and I wanted it to be easy to grab. This one makes his *hugely* soccer fan daddy happy, too. LBD spends a lot of time grabbing this, and he even caught it once as it fell off a couch. It's easy to hold onto, lightweight and BPA free. 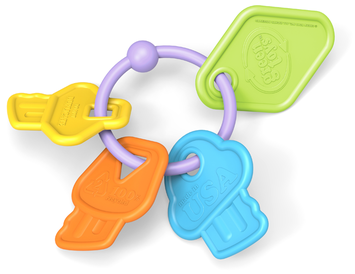 Where are they? I haven't seen these in a couple weeks, but these were the very first toy our baby played with. They're easy to grasp and fun to shake. They kept his attention - even stopping the crying sometimes in the car. They're eco-friendly, too. They are BPA free and made from recycled plastic. These folks make cars and stuff too- we'll probably buy more of their stuff later on.

These two IKEA kids' soft toys are super sweet looking and soft to touch. They are lightly stuffed,  easy to clean, and have no removable parts. The hedgehog has a squeaker inside that our LBD hasn't found yet. The bunny is much bigger than the hedgehog, and fits across the LBD in his carseat. It's 15 inches long, so it covers his lap when he's face to face with it. It's hilarious to see him suck on its face and wrestle with it.

This set of little chewy mushrooms by Vulli (french company) are playfully called "chan, pie, and gnon" (mushroom in french, right?)  This squeaky toy was fun to prop under LBD's leg when he was in the heights of his kicking phase, and now that he's almost crawling, he has just started to realize he can make the squeaking sound by pushing on it. It's hilarious to see his surprise and delight when he squeaks it with his face, tummy, or legs, and he looks to us to be sure we know that it's squeaky. It sounds just like a dog toy. Ha! The Chan, Pie, and Gnon are easy to grasp, soft natural rubber and have "alimentary" paint. I'm not sure what that is, but I uncharacteristically trust this company. I just really like their stuff... They are also the makers of Sophie la giraffe. I like the mushroom waaay more. It's just so cute! We got the one with the curvy handle head, which is great for chewing as well as holding.

Now that our LBD is all out teething, we got a toy just for this. It's the NUBY silicon teether and he likes it pretty well. He's quite fussy and when it's chilled he seems to enjoy the cold. It's tough to see him so frustratey, but it feels better to give him something cool & comforting.

We have all four of these. (I know, they aren't toys. I still think they belong in this post- maybe it's a post on diversions rather than just toys.) I really, really didn't think I would be OK giving our kiddo a pacifier, but I am sooo glad my cousin gave us one at the baby shower. It was so helpful numerous times when we wanted to soothe our little baby dude in the car. We don't really give it to him otherwise. After we had two and I thought we lost one, I insisted we buy another set so that we would not run out again. Hehe, I went from wanting none to four! They are Gumdrop Soothie, modeled after the NICU style and human nipple-shaped. (supposedly better for mommies who breastfeed.) 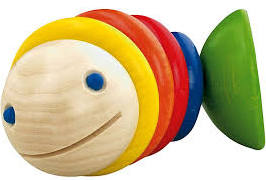 This rattle is made by a German company, Haba. We love it. The rainbow parts are flexy with a taut rope inside. It doesn't stretch, but the wooden pieces still move enough to be fun. This is a favorite teething ring for little baby dude. There was a stir about Haba moving production to China. Here's an interesting article about it. Our LBD totally chews on these kitties every day. Lately he's taken to nursing the tails and legs. It's pretty cute, and I feel comfortable with it because they are washable. The stripes are delicious and these plush rattles are easy for new babies to grab. He's been playing with these since very early on - among his only "first toys." Hooray IKEA. Note: I recently found our cat playing with them. Apparently they're not just fun for babies. :/

We bought this in a boutique baby store (it was their cheapest toy at $15, I think) and our little guy couldn't hold it for a couple weeks. Now he chews on it and folds it. I love the colors. They are so rich and it looks pretty neat- stretches slightly and forms a star or a circle. In the shape pictured, it also rolls like a wheel on flat surfaces.

We really wanted to go to shows and help our LBD to experience live music, too, (and just aren't ready for a babysitter yet) so for his 2 month birthday we bought LBD a pair of baby Banz earmuffs. They are rated for safety at sporting events, drag racing, concerts and air shows. They are way too cool. And, yea, I chose the lavendar color. Gotta love purple.
Posted by MommyNaturally at 9:47 PM