So the eggs are painted and the color is nice, but when we handled them (baby found them and carried them around, then grandma picked them up, too) we got a bit of dye on our hands. Luckily, the dye is "food safe," though I don't think any of us eat colored foods.

It's time to seal the eggs, and complete the project! Grandma found some natural beeswax at the store and we mixed one part shaved beeswax to four parts olive oil. The process was awesome! I hope to do it again, and next time will take pictures all the way through. This time I just have an end photo. You'll notice a couple took color waaaay better than the others. I think this was due to better sanding from the start. The worst looking, the green and blue were only sanded after the first coats of color were applied, and seem to have more blemishes than the others as well as the machining rings. 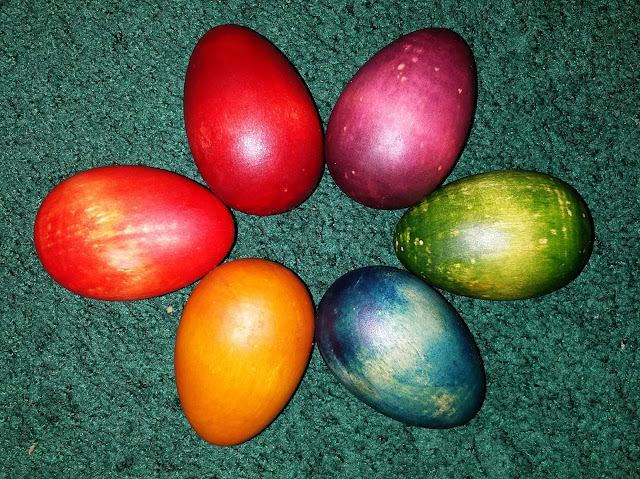 I mixed one ounce of shaved beeswax to four ounces of olive oil. I heated them double boiler style on the stove until they blended fully. It didn't take long. In fact, the water barely had begun to steam. I'd read the beeswax would require 150 degrees, which I like because I'm pretty sure olive oil retains its beneficial properties until somewhere around 220 degrees. (We don't use olive oil for cooking when our cooking requires hotter temps, preferring coconut oil, butter, or ghee.)

Then I just stirred and scraped the edges of the metal bowl for about five or ten minutes until it was thick like a salve. It was quite cold out, so I put it on the edge of the porch and watched it thicken almost instantly. This was partially due to a fussy, teething baby who I thought would enjoy some outdoor time. By the way, he was in our Girasol baby wrap just about the whole time until it was finished- safer & comfy for him, easier for the adults.

This was so easy & so aromatic! I ended up rubbing it on the baby's knees (he still crawls often enough to have rough little knees) and my hands, then on my feet and his hands. We rubbed it into grandma's wooden spoons, her meat mallet, and her cutting boards. We also got it all over her wooden floors and quartz countertops. Oops! Maybe a better project to do at our place next time. Hopefully there will be a next time. I totally loved making wood seal out of olive oil and beeswax.

One final note: When we started I just assumed pouring boiled water over the cheese grater would remove the beeswax. I'm lucky, because this wasn't my grater and there was beeswax stuck all over from me rubbing them together to shave it. It totally was melted off with boiling water, so if you're planning the process, use metal implements and boiling water to ease clean up.

Okay, here's the recipe/required tools to do it the way we did:

One ounce beeswax
Four ounces olive oil
Grating tool- we used a cheese grater, and I was surprised to find that the easiest part to use was the slicing tool in the middle instead of the fine or large shred sections.
Small stainless steel bowl (mine had tall, flat sides, which was super convenient for scraping along them as it cooled)
Small cooking pot
Stirring implement(s) - I liked a chopstick for stirring while it heated and a wooden spoon for cooling
Jar to transfer the finished product into

Add enough water to your cooking pot to meet the level of the oil & wax inside the small bowl.

Stir if you like until the wax is fully melted in the oil. I don't think stirring is necessary, but it was fun.

Transfer out of the cooking pot, allowing that water to continue to boil to clean the grater, if necessary. Keep the wax/oil compound in the steel bowl to cool.

Allow it to cool, stirring occasionally and scraping the sides.

Transfer to a jar for storage. All finished! :)

Rub on wooden toys, cooking tools, cutting boards, furniture, etc.
***Be advised: Test a small patch first. Be sure you like the result.*** 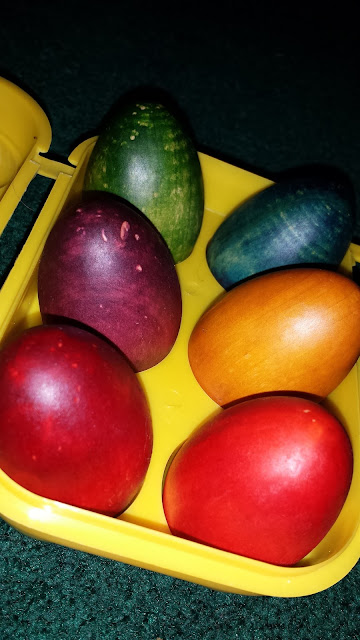 Posted by MommyNaturally at 9:04 PM