Challenges and Joys of Crawling & Cruising

We're amazed that our little baby dude (LBD) has already started standing and cruising around. From what I hear, cruising is when a little dude/ette starts to mobilize from standing to moving along edges of things they can hold onto.

Perhaps this isn't odd, but it seems really funny that LBD hasn't yet learned sitting- at least not on his own, and doesn't stay up if we put him in a sitting position.

I've read that our little folks will each be very different during this first year or so of development, and it's so fun to watch!

It's totally the coolest to see LBD put on his determined face (lips tightly pressed together against his new two teeth, in a straight line) and pull himself to standing using fabric on our sofa, chairs and bed. He looks so pleased when he sees our smiles back at him.

One of the hardest things to watch is our son tumbling down when he's in an impossible position or when LBD just can't hold himself up any longer. Sometimes he sticks his bottom out so far that he's standing at a 90 degree angle. We now feel that he needs constant supervision- no more leaving him a couple minutes on the bed thinking he wouldn't be able to roll or scoot too far... nor leaving him on a blanket "knowing" he'll be there when we return. Now, if I get up in the night, I check to be sure he's still in bed before I stand, worried about tripping over him if he got up and fell asleep on the floor. Not that it's happened. I guess that part of parenthood- worrying about things before they even happen- but it makes it easier to baby proof.

So far, we've put caps on all our electric outlets. We've tried this cheapest Munchkin brand baby gate (image below) but it was such a piece of crap (sorry, it's true) that we returned it the next day. I couldn't even get it to lock in position between our walls... we both tried and we read the instructions. No go. Someone else I know has a really similar gate for their dogs. I asked if it worked and she said they don't test it... This is exactly the problem: I'd expect our son to test it thoroughly if we or something he wanted (including Miz Kitty) were on the other side. Or just because it is there and wasn't before. When I touched our gate it fell over. For now, darling hubby and I have decided to continue with constant supervision. 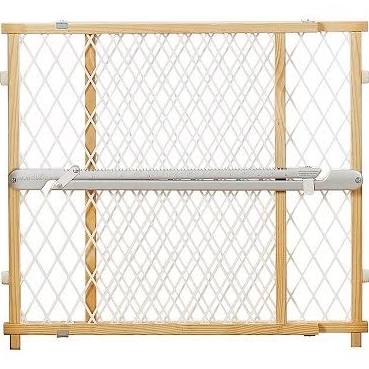 Eeek! Speaking of constant supervision, I was setting up the high chair with our son out of his normal "mommy pocket" (Girasol carrier review LINK) and he was pushing a ball around. (New Favorite Game!) The ball, and then our son went under an old armchair. My hubby's folks refurnished the chair some years back and our cat took to it immediately when the gave it to us. She loves to sit in it these days to keep her above the LBD's reach. It was pretty funny to see her react to him climbing up and looking at her in the chair today. Anyway, when he climbed under the chair, his head was rubbing against the underside so I inspected it for danger. And, danger I found. The chair has half inch iron nails (guessing by appearance) pressed into the underside to secure the fabric. This never mattered before our precious LBD started scratching everything he could. (around 5 mos?) Now I think we're going to either declare the office totally off baby-limits and move the chair there or *sigh* let it go... this would be sad though, as it is really our kitty's favorite spot, and we both love to sit in it.

These are challenging and such fun times. It is so cool to see our LBD as a person, gaining a small semblance of autonomy and it's nerve-wracking to see what he gets into, and it feels so right that these steps of development are paced as they are.


Posted by MommyNaturally at 10:07 PM